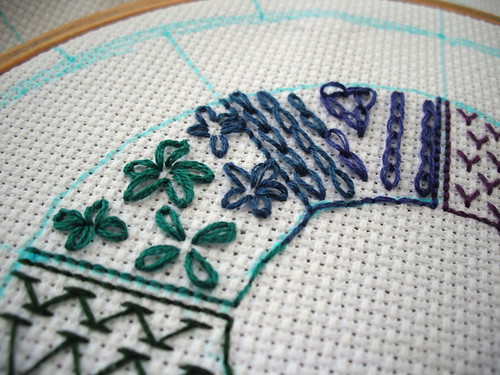 Weeks 7 and 8 of TAST were a little difficult for me. Week 7 was the lazy daisy stitch, and apparently my lazy daisies look like deformed starfish.  Haha! The conclusion of that experiment was to not make the center of the daisy one single point, but to separate is out a bit. Also, I had to use more than two threads to give it enough weight to lay down correctly. Any fewer led to even more deformity, if that’s even possible. Week 8, the chain stitch, was easier. I tried doing a triangle, but due to the method of construction, this stitch lends itself towards slight changes in direction more than severe changes. 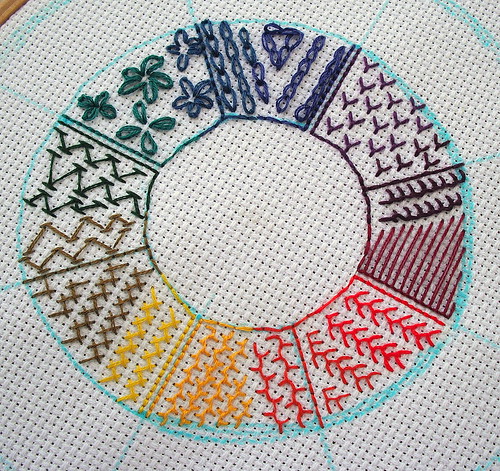 Here are weeks 1-8 all together. The first ring of the color wheel is done! I’m liking it a lot. (P.S. This sampler is going to be huge!)
Also, a few weeks ago Diane asked about the marker I used and if it would come out of Aida fabric. Of course, I hadn’t tested it, so I was a little scared to, but good news – it came right out with water like it was supposed to! I removed the ink around the inside diameter of weeks 1-3, which you can see in the picture. The pen used is a Dritz double-sided water soluble pen that I got at either Joann’s or Wal-Mart for much cheaper than I see online.