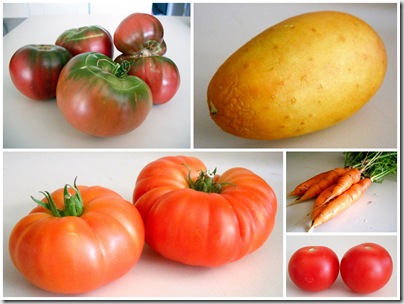 Lots more coming from the garden! Clockwise from the top left we have Black Krim Tomatoes, Poona Kheera Cucumber, Red Cored Chantenay Carrots, Fence Row Cherry Tomatoes, and Hazelfield Farm Tomatoes. I’m really surprised how green everything still is; it helps that I’m watering every other day! It’s been in the high nineties for the last few weeks, and probably will be for three more months, but hopefully if I keep on top of the watering, everything will make it through the summer.

Unfortunately, the squash that was being attacked by squash vine borers did not make it. I kept taking out more and more bugs, and I don’t think I’m the most delicate when I’m removing them. The vines got so torn up that they had no hope for recovery. But just in case any of you have the chance to fight them, here’s theoretically how it should work.

Before you even get to the point where you’re fighting these bugs, start burying the squash vine every so often to encourage rooting. Then, if you happen to cut up the vine removing borers, the plant can use the new roots to stay alive.

image via University of Minnesota

First, if you see these guys flying around your squash, kill them immediately. Have. No. Mercy. These are the adult squash vine borer moths, which lay the eggs that turn into the larvae that kill your plants. I didn’t see any of these, but I didn’t even know to look for them.

Next, watch for eggs that have been laid on the vines of your squash. Remove them and squish them so that no larvae are born. Again, I didn’t see any of these, but I wasn’t looking for them. 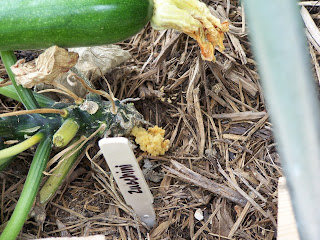 image via The Haphazard Gardener

If any borers have gotten past the egg stage, they’ve turned into larvae and are probably eating your plants. You’ll know they are there when you see frass, which looks a lot like sawdust. I also had dying leaves right by the frass, so I could pretty much know exactly where the borers were.

image via University of Minnesota

This is what you’re looking for once you’ve started digging around in the vine.They look like grubworms and they’re totally gross. Try to slice along the length of the vine as little as you have to in order to get to the borer. Remove it and kill it, or just stab it to death and leave it there. Supposedly if you go out at night with a flashlight you can see them through the vines and “impale them with a needle,” as one of my gardening books puts it, but I couldn’t see anything when I tried. Bury the part of the vine you cut open to let it heal.

Hopefully this little guide will help you be more successful than I was in fighting these nasty bugs.

Do you have any other methods for fighting squash vine borers?